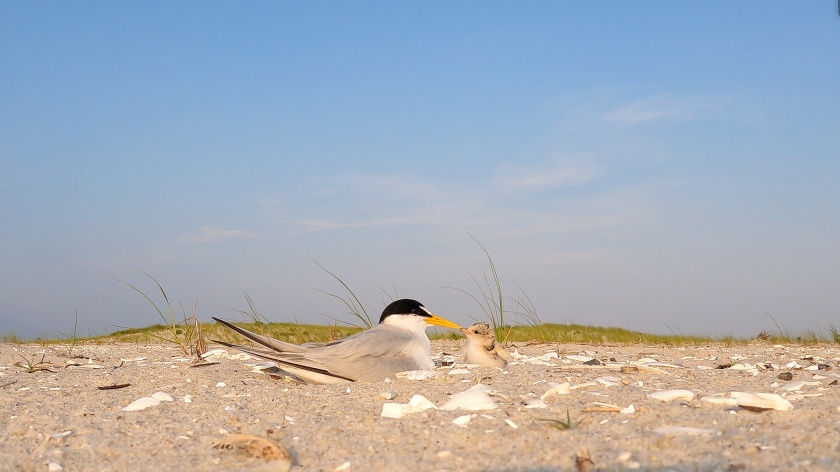 So whatever happened to the Least Tern colony forming in Plover Park this season? Sadly, the forming colony collapsed soon after that fateful night when Coyote went berserk and ate everything in the Park. That was enough for the Terns’ collective hivemind to decide that was too much drama, and so they moved on within just a few days, abandoning both the Park and our highest hopes.

But all was not lost. For better or worse, four random nests had somehow escaped Coyote’s detection and survived intact. Two were high on a hill. One was on the wrong (or right!) side of the dune. The other was just plain lucky. And, luckily for us, the bold, dedicated birds who laid those nests decided to brave Coyote’s future attacks and see the nests through, even as their entire community abandoned ship.

Least Terns are very “social” animals. They form enormous colonies, sometimes in tiny areas. Even though these colonies are chaotic and often violent, the birds support each other through the nesting season, and they find great strength in numbers.

So it was pretty sad to watch the only four pairs remaining, spread far apart from each other in the Park, going it alone. Nothing draws up a tear like seeing a lonely Least Tern sitting on some seemingly doomed eggs. They were castaways on a desert island; the last families left to repopulate the earth at the end of the Zombie Apocolypse.

But God bless them because all four nests hatched. So while it wouldn’t be quite the dream of thousands of Least Terns raining chaos and poo down on unprepared visitors to the Park all summer, these Four First Families of Tern represent an enormous achievement for Plover Park and an excellent sign for the future.

Unbelievable! Todd Pover’s Plover Park opened up just the teeniest, weeniest, smidgeon of the island for them and they came flocking from every direction. I imagine that Long Beach Island was an enormous Least Tern colony before we arrived. The island certainly would not be the same without them, so we are really, really fortunate to have even just these four pairs.

Three cheers for Todd Pover’s Plover Park, for those four sad, lonely LETE families, and for the bright, bright future for all of us that their success portends.

Enjoy this short video celebration of the first baby LETE born in Barnegat Light in who knows how many years.