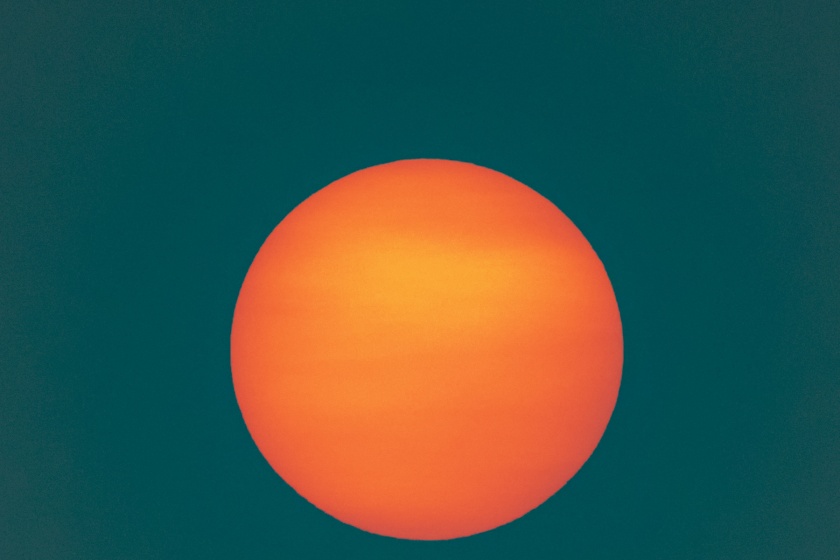 For a magically brief moment, smoke from the West Coast wildfires created an eerie filter above the coast of New Jersey.

You could subtly sense its presence in the puzzling appearance of the clouds: sharp with contrast and reflectively colorful on a stage overhead, standing boldly before a thin, gaseous, and gauze-like curtain of ash softening the light behind them.

But you could see it most clearly at the start end of each day, when the sun became a soft, subtle, glowing orb about an hour too late, and too early, respectively. It was beautiful. It was frightening. It was profound.

It was beautiful in that the sun became hypnotic and seductive. Our blinding ball of fire suddenly had it’s dimmer set at 25%. Its soothing orange glow just begged to be stared at and contemplated, despite the dangers. I wonder what kind of damage I have done to my only pair of eyes taking the photo above. I just couldn’t help it. Such is the beauty of the sun revealed, normally hidden behind a blinding radiance.

And it was terrifying to behold. When something is unusual in the sky, it can cause an anxious unease. The sky is normally our blanket; wrapping the planet in comforting, familiar, expected shapes and colors. The sky contains us and keeps our world small enough to seem… manageable. But when something unfamiliar appears in its limited vastness, the sky’s enormous presence suddenly feels threatening; and we remember how microscopic and powerless we actually are. The curtain is lifted and we are reminded that the sky is just an illusion of sorts; a graceful daytime distraction for the faint of heart, hiding the terror which actually surrounds us: an infinite, violent, chaotic, unreachable sea of rock, metal, fire, and inconceivably black darkness.

But most memorably of all, it was profound. On the simplest level, the fact that the winds carried this smoke so far reminds us of the distinction between weather and climate. We often think of our local winds, or clouds, or storms, as our own; the California Sunshine reminded us that our weather is just a tiny window through which we see but a glimpse of an unseeable planetary system.

That recognition of interconnection is deepened remarkably when we consider the origin and nature of each tiny particulate in that smoke… the last remnants of landscapes, plants, and creatures beyond count; the lives, the memories, the hopes, the tragedies, and the dreams of people now vanished, but not completely destroyed; instead, floating overhead as an enormous apparition, a ghost of what once was.

What did our ancient ancestors make of such a sight?

I can certainly explain what I am seeing. “Behold, it is smoke from those wildfires out West!” But that does not reduce the instinct to marvel at the beauty, shudder at the terror, or wonder at the meaning. Because those are instincts. They overpower my understanding, my explanations, and they come from a place too deep to really expose. These responses surely existed long before you or me. I feel grateful I even recognized these feelings at all.

This planet is as consistently violent and destructive as it is creative and beautiful. And sometimes, all at the same time. We were created with this understanding, even though we forget sometimes.