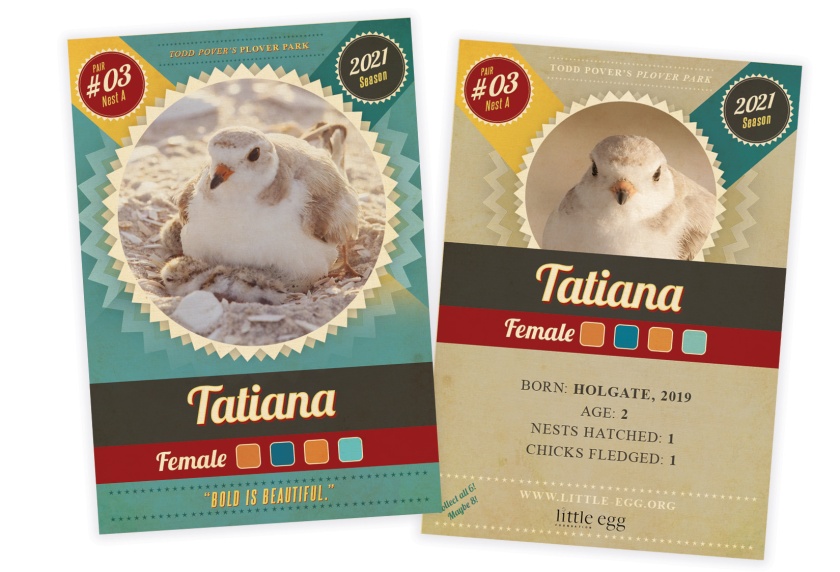 Next up in the “Collect All Six, Maybe Eight” series created to introduce you to the very real birds of Todd Pover’s Plover Park is… Tatiana! Hubba hubba.

The first thing you need to know about Tatiana is that she is the most beautiful piping plover you’ve never seen. Or, if you’ve seen her, the most beautiful piping plover you’ve ever seen. I know it sounds like hyperbole but it’s not. She is the prettiest plover on the entire planet and anyone who tells you otherwise should be cancelled and banned from all of the socials because they are trying to feed you falsehoods and lead you astray. That’s how pretty we’re talking here. I’m not making this up. She is stunning, in the most literal sense of the word.

People, especially biologists and birders, who see Tatiana at Barnegat Light are always stunned and always, always, always, without fail, say something to the effect of “Who is that bird? I have never seen such a beautiful plover.” That’s how pretty.

I promise you this is true. If you were ever going to visit Barnegat Light State Park to see a piping plover, Tatiana is the bird to see. That’s how pretty we’re talking.

Part of it is that she is unbelievably pale. Piping plovers are generally paler when they are young, female, and not breeding. As they age and come into the breeding season, their plumage darkens; especially their black “head band” and “neck band.” Tatiana must lack some gene or something because she just glows a pale golden beauty. Look at her trading card and compare to the other females as they get released.

She nested successfully with another newcomer named Stacy and they hatched four beautiful babies. Known as the Twin Peaks Brood their names were Agent Cooper, Gordon Cole, Jowday, and Windom Earle. They were the happiest, most beautiful young family, as captured in my 2020 short film “Million Dollar Babies.” (Click here to see the original Million Dollar Babies from 2020 featuring Tatiana and family.)

But then something very dark happened. One night, out of nowhere, we found that another nesting pair (Giant’s Bane and Jennifer Jason Leigh) had abandoned their habitat on the other side of the Park, hiked across the entire landscape, raided Stacy and Tatiana’s territory, and snatched three of their babies.

They left Stacy and Tatiana with only Windom Earle (the slowest one), and proceeded to raise their other babies as their own, right there, on their habitat, right in front of them, all the while trying to violently expel poor Tatiana and Stacy from their rightful place. Even towards the very end of the season, when all the birds had fledged, Giant’s Bane and Jennifer Jason Leigh still wouldn’t let Stacy, Tatiana, or little Windom Earle anywhere near his stolen siblings and their stolen offspring.

Stacy and Tatiana did the best they could and fledged Windom Earle. While they seemed to accept their fate with humility and grace, it should be noted they stood their ground against Giant’s Bane’s daily violence and Jennifer Jason Leigh’s relentless attacks and never gave up their turf. Ever.

They watched their young being raised by another set of parents who had snatched them and were now living essentially right next door.

I’m pleased to share that Tatiana survived the winter, has returned to Todd Pover’s Plover Park this spring, has reconnected with her love Stacy, and they have just laid their new 2021 season nest. They are pair #03. As of tonight they have their first egg, and I expect their second will be there in the morning. (And, and I swear I am not making this up, their first egg is the most beautiful piping plover egg I have ever seen. It is super unique and it glows like kryptonite or something. It was stunning. I realize I sound biased here, but I’m just spitting straight-up facts. Even the great Kashi Davis, head of New Jersey’s beach nesting bird program and the woman ultimately responsible for every nest in the state fell head-over-heels in love with this egg yesterday.)

Please watch this unbelievable video from 2020 when we banded the Twin Peaks Brood, just a day before Giant’s Bane and Jennifer Jason Lee snatched all but little Windom Earle from Tatiana and Stacy. Her fearlessness is on full and obvious display and should require no further explanation.

Tatiana and Stacy are tending their eggs, with Giant’s Bane on his new nest just to the south, and Jennifer Jason Leigh on her new nest with Octavius Rex just to the west. Something makes me think Tatiana’s babies won’t be so easily snatched this is season. Something makes me think despite her ease, her humility, and her grace, that she has forgotten nothing and knows exactly what she is in for.

But stay tuned! There is never a dull moment in Todd Pover’s Plover Park!

If you think Bold is Beautiful, favor aesthetics, or hate baby snatchers, then Tatiana just might be your bias.