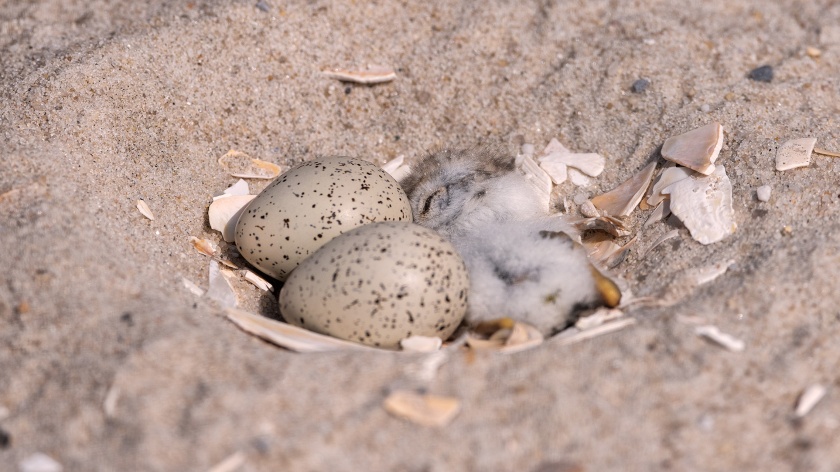 As the sun rose over Plover Park this morning, we saw something some of us thought we might never see again after such a seemingly endless and total absence : the sun. It felt glorious. As I’m sure it did to just about everyone along the coast whose big holiday weekend plans were completely eviscerated by the vicious nor’easter.

Entering the Park from the western edge, it became immediately clear that during just a brief shut out the Park had been made completely a-new.

After a long, cool, and very dry spring, both of Plover Park’s water features (Lake Anchovy and The Predator Pond) had grown dangerously dry. These precious habitats which are meant to feed the beach nesting bird families in abundant peace were at their smallest since they were created, at precisely the time they were needed the most: just as the first chicks were hatching.

But a single nor’easter fixed all that practically overnight.

When we see flooding like this along the coast, we usually panic. But the piping plover rejoice. A barrier island in its natural state is meant to flood far more frequently than we’ve allowed them to since we arrived. Yet unlike us, our native animals like the piping plover are a perfectly flood adapted species. They know how to build their lives around the risk and, when they get wrong, stand ready to simply start all over again. They understand how to embrace a dynamic coast. You see it clearly in their incredible resilience. We can learn from them. One day I’m sure we’ll need to if we want to remain here.

Having watched Plover Park take on the storm through the tiny window of The Little Egg Cam this weekend, I was almost too scared to enter. I knew whatever happened here couldn’t have been easy for the animals. I knew because I had seen the struggle. This moment, in this place, felt… sacred. I didn’t want to disturb it. But I needed to witness it.

So I first walked a wide arch around the home of Octavius Rex and Jennifer Jason Leigh. I peered longingly through my binoculars, desperate for just a single glimpse of one of them and hopefully a tiny chick or two. But I saw nothing. I heard nothing. So I decided, “I’ll try this again later, there is plenty of time…” and I pushed on.

When I reached the Predator Pond I quickly realized that the storm had transformed not only the landscape but also the population. My whole focus had been on counting which birds we might have lost. I never considered what birds we might have gained. But it became immediately apparent that there were more piping plovers than there were supposed to be. It was absolute chaos. New characters were popping up behind every hill, some flying in courtship, most fighting with others, some just hiding in the grass, seeking refuge, and hoping no one would notice.

I tried in vain to read each tiny band, but before I could get a full band combo, another piping plover would come out of nowhere, chase it away, and I’d have to start all over again with a totally different bird. Clearly the storm had changed the plans of many a piping plover along the coast. It seemed pointlessly chaotic to try and suss it all out in the immediate flux. So I decided, “I’ll try this again later, there is plenty of time…” and I pushed on.

I was thrilled to see our oystercatchers, J22 and J23 tearing across the flats with two of their three chicks in tow. They had survived. Oystercatchers are notoriously sneaky… I’m hopeful that third one was hiding somewhere in the park and I just couldn’t see it.

I managed to locate Giantsbane and he was foraging lazily along the newly flooded Predator Pond with no sign of Myrtle or their new family. But I wasn’t overly concerned about this. Giantsbane and Myrtle are our most experienced pair. Myrtle is a master at hiding those chicks. She’s frustrated my attempts to count her babies for years. They could be anywhere. So I decided, “I’ll try this again later, there is plenty of time…” and I pushed on.

And so with nothing left to distract me it was time to check on Stacy and Tatiana.

Unimaginably painful to see, but good to finally know for certain, their second chick didn’t make it.

Yet before I had a chance to shed a tear for this tiny life, I heard the one sound I really wanted to hear: a chick call. Tatiana was calling to a chick out behind the exclosure. As I ducked down to look I caught sight of her squatting down to brood something. My heart leapt.

But then so did she. She leapt up. And then I saw something I absolutely could not explain until I snapped a photo and zoomed in.

Tatiana was carrying her dead chick in her beak, laying it down, calling it, and trying to brood it. She must have known something wasn’t right; perhaps she just wasn’t quite ready to give up.

Piping plover are amazingly resilient; inspirationally so. Recently when Jimin & Maya’s nest was exclosed, the young pair was pretty freaked out. Thankfully I was with master Kashi Davis when I witnessed something I had never seen before: as the young pair fretted about the new cage around their eggs, Jimin ran a bit down the beach and started scraping new nests, with fierce determination and boisterously. The whole scene was as if Jimin was saying to Maya, “It’s OK. We don’t need that nest. Here, we can make another one. We can start over. Right here. Right now. It’s no big deal. We can do this.” It was a sad and also a beautiful thing to witness.

I also saw Stacy scrape a bit today; each time he returned to his now deceased chick and pondered his next move. But it didn’t feel sad to me. It felt hopeful. I witnessed that brief moment where these unimaginably resilient and determined animals pause for just a moment to explore their options before getting right back to driving the future forward.

Who knows if it just takes a while to accept what’s happened, or to be sure what we think might have happened actually happened, or if it’s just that we are creatures of habit and sometimes we behave like ghosts of our former circumstances. I wonder this when we see things on The Little Egg Cam like Giantsbane returning to check on his nest long after all of the eggs have hatched, or see Tatiana still calling to her dead chick. I wonder, do they not know? Or, more like us so often, are they just not ready to know, just yet.

The timing of Stacy and Tatiana’s hatch was heartbreakingly tragic. But they still have two eggs in the clutch, and that’s what it appears they’ve chosen as their next move. They are moving forward, so I’m going with them.

They have already dug them out and begun incubating. Their dead chick still joins them at the nest, but they have begun pushing it out to make room for new life in the nest bowl. So this afternoon we begin monitoring Stacy and Tatiana’s Nest #03A again and will be streaming it live at The Little Egg Cam.

They’re not dwelling on the unfortunate weekend, so we shouldn’t either. Because there is plenty of time, and a willingness to keep trying is the true spirit of the beach nesting birds, and the absolute soul of Todd Pover’s Plover Park.